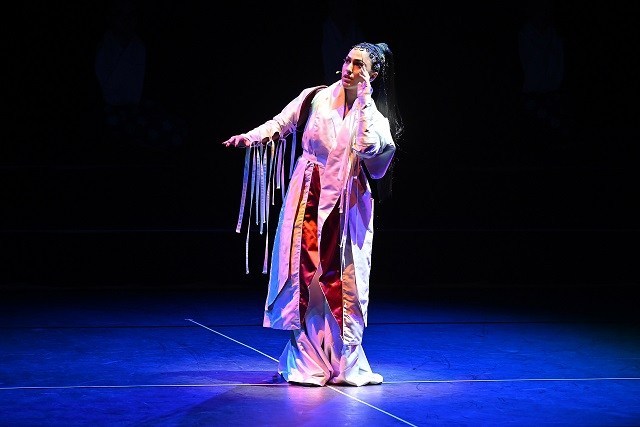 Genre defying pop music is not a phrase one would quickly attribute to, now cult level, Japanese percussionist Midori Takada. So the collaboration with up and comer Lafawndah doesn’t jump out on paper. However, the little known story of her taking up residence with legend David Bowie, and indulging in acidic binges that would put both the Beatles and the merry pranksters to shame, helps it all make sense. Her solo show professing the ‘perfect wisdom’ taken to new, all encompassing heights, stepping outside any cultural and religious preconceptions and frameworks to spread the devout message. A feeling familiar to those ‘experienced’ a feeling, a knowing, which isn’t tarnished by dogma and thus accessible to all.

On a quiet Sunday (of course for any ceremonial proceedings to have power ) at the barbican she steps out into the darkness. A single light illuminates the bell chimes to the left of the stage as she gently creeps in, movements accented with chimes. Every movement as precise and controlled as the notes she plays. Easing into position in front of the chimes she begins to strike, precise order. Top left, top right, middle, bottom left, bottom right, almost as though she is banging in a cheat code, the sacred code, to summon the monks into being and bless the land for ceremonial proceedings.

Gliding in through the stalls from both sides of the space the monks quickly assert the power and harmony of the human voice. They spread intention, clearing any lingering bad energy from the space before taking up sitting position at the rear of the stage, on individual zafus they watch over proceedings.

The Ghanian drummers move into the position from the right and bring in the beat to keep proceedings in time and adding another continent of influence. Adding rhythm to the show and a whole ness to the sound, not drowning out or distracting from Midori’s percussion and filling in the sound under her precise, powerful notes.

A majestic swoop in enters this mystical, otherworldly being. It is clear from the extravagant, eccentric aura that they are not from this world, planet, possibly even plane of existence. They have been summoned down from a higher plane, outside of, or even perhaps a culmination of, all cultures, completely outside dogma; or even a summation of it all, with a unique, extra terrestrial position to be able to present the ‘Perfect Wisdom’ in a way accessible and useable by all. This for me is the key focus of the show. It is not as has been before, Midori professing and demonstrating her experience of the ‘perfect wisdom’, no intense gong solos, her energy focused and channeled on the summoning  of Lafawndah to fully embody, express and present – the beautiful, soulful expression from out of this world.

A form that was musically deep and expressive, soothing the ears, soul, heart and mind; yet communicating on a level higher than what is known. Of course this can be boiled down to a purely musical form, but you would have to be very naive to think and only experience that side of the message. For it was strong and direct, especially compared to those coming from a similar place of esotericism. While I found the, multiculturalism of this show to culminate powerfully with the inclusion of Lafawndah, touching many more hearts with broader, awesome brush strokes of the meta-physical-inter-planetary being, I did sincerely miss the intense gong solos I’ve seen Midori embark upon in previous shows. It was a shear display of force the way such a small, elderly woman can command such power and create such sound; alas this ceremony she channeled that power into others outside of herself.

Ultimately it was an transcendent experience and combined many cultural elements in a profound and impactful way; delicately blending different sounds and spatial factors in a much more complete whole than previous solo shows. However I do feel the arena was somewhat lacking, the barbican in its brutalist nature not having quite the level of magic and majesty needed for such a ceremony, along with the Sunday evening crowd. All of which looked old enough to fall into the category of those overlooking her studio releases at time of release, noting that through the looking glass only gained popularity after its 2017 repress on plato flats, a good 20 years after its initial release.

It is a performance that has left me wanting. Lafawndah’s stunning, gully pop album just released is hard and can’t help but garner attention across the spectrum of popular music. More collaboration with Midori is exciting in adding that special, spiritual touch to make some more truly meaningful full music outside of the vapid sphere of pop music; even better if it wasn’t backed by high end fashion companies this time.