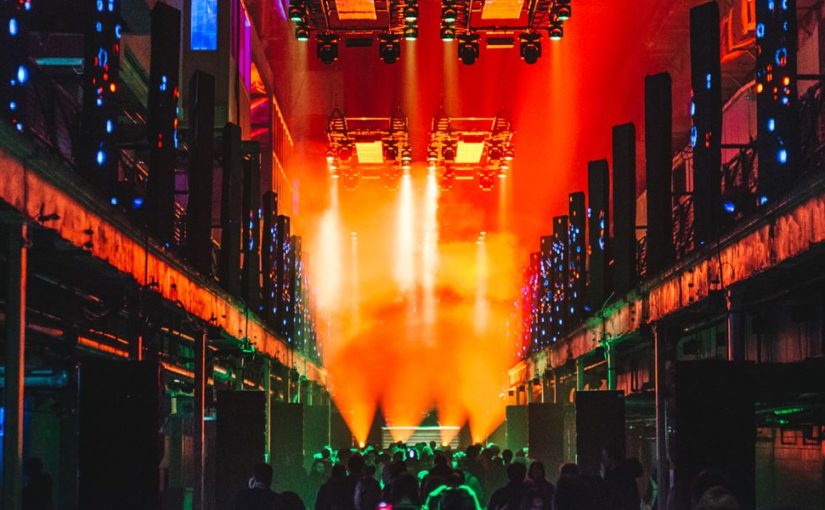 Printworks, nestled in an industrial estate in the Canada Water area, just south of the river, is a great example of urban regeneration. It is in the space of what was once West Europe’s largest printing facility responsible for printing the Metro and the London Standard and has now been transformed into a 6,000 capacity multi-dimensional venue. This reuse of existing archaic architecture for new cultural facilities is certainly pleasing in today’s throw away society. Although not as romantic as the squat-cum-clubs of the Berlin scene, Tresor and Berghain, it is still a powerful feeling. Along with the area, Printworks itself is constantly being improved and fine tuned, everything from sound and lighting configurations to crowd flow and drink purchasing systems (no more drinks tokens, yes) which makes me extra excited to witness the second season of events, having a complete overhaul of its audio visual equipment this time round.

For the opening party the Hydra took the realms in curating the dance. Long time legendary party coordinators in London, it’s no surprise they put together such an impressive line up. On entrance it was smooth, a short walk through the winding complex greeted by friendly staff cracking jokes and making you feel relaxed and not tense on edge like the airport style security of some London venues. The building opens up as you start to get a shear size of the space, illuminated with tube lighting installations and ambience with a growing bass thud, enticing you into the cavernous space of Printworks’ main Press Hall.

The sound of Red Axes filled the room with surprising clarity, the improvements to the main room sound system are instantly noticeable; a lot fuller and richer sound through ought even at the bar area. It is a vast improvement to the patchy and often overworked and blast-y sound in the main room before. The duo were bouncing through with clean heavy hitting rolling techno making you forget it’s only early afternoon, playing late night club bangers with worldly acid tinges and playfulness of their productions, such as a the M.A.N.D.Y remix of “My Warehouse” by Roland Leesker. As they build with more cheeky percussive tunes, a hallmark of their sounds, teasing pan pots and tin drums over mystique sounding psychedelic chanting style vocals. The vibe got progressively psychedelic, imagine acid campfire, everyone gradually losing themselves in the over powered strobe lights and then dreamy twinkly percussions like you’re laying back looking at the night sky, then BAM pounding beat back to your feet. A very good set, although relied on cutaway drop a bit too much creating a sense of plastic tension rather than sincere, but still very textbook.

On occasions the lighting in the main room was very overwhelming and distracting, especially the ridiculous amount of lasers and strobes, which become disorientating at times. If they’re well engineered they’ll be fine, but nothing on the epic beam setup of last season. The full on lighting was almost blinding at times making it hard to navigate, but on the whole the crowd flow down the sides of the main hall allowed for good access without getting too crowded, with exits whenever you needed. Coupled with the more solid sound coverage, it was much less hectic than prior configurations.

Room 2, nestled away at the back of the Press Hall hosted nordic rave legends Prins Thomas and Lindstrøm for the later end of the day. I was instantly a little disappointed to find the crisp and clear VOID acoustics had been replaced by a much more boomy and overpowered system which did not sit well in the room, although it still did a fair job. Prins did not disappoint however, playing heavier than usual layering upbeat techno and powerful disco to cosmic effect. There was a lot of positive dancing and happy faces, upbeat ethereal party time; weaving in twinkly synths as though we were dancing in the stratosphere while laying on huge bass keeping us from drifting off in space. A tune that stuck out from his set was Bawrut’s remix of “Devozioni Dialettali” by Enzo Avitabile, although the main highlight had to be an almost 10 minute long rendition of “I Feel Love” by Donna Summer involving rolling Chicago hats and claps yet withholding the vocals, somehow more satisfying in simply respecting the magical arpeggiated beat that Giorgio Moroder concocted.

The finale came in the form of House legend Kerri Chandler, hailing from New Jersey, he steps up, straight into high energy drum roll double tension tempo claps slapping the slider to his own beat. He knows a party and truly turns it into one, expertly blending from big room techno bangers such as “Bang’t” by Geeeman to euphoric disco house “Let Love Enter” by The Disco House Lovers and high-energy punchy numbers like “Work It Out” by Karizma, to modern house classics like “If Only (Lehult)” by Liem and “Never Grow Old” by Floorplan. You could really tell he is a class above the rest the way he effortlessly swept away any lingering residue and fatigue from an afternoon of heavier tunes and filled the crowd with ecstasy and new energy. The set was accompanied by a huge bright disco ball, sparkling down the vast hall, a lighting fixture which was tasteful and added to the music. Overall a great way to end a solid selection of music and set everyone up for a beautiful rest of the weekend.